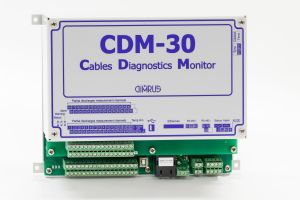 «CDM» monitoring system (Cables Diagnostics Monitor) is for on-line monitoring of cable insulation condition of up to 45 cables with the rated voltage of 6-220 kV. Every monitored cable should be connected to the same switchgear.

The use of «CDM» multichannel monitoring system allows reducing the overall expenses on the monitoring and diagnostics system, estimated for one monitored cable. Besides, it allows more effective high-voltage noise rejection, which is very significant for large switchgears. 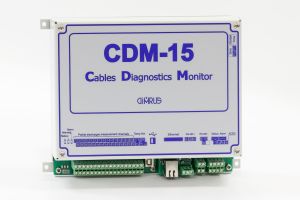 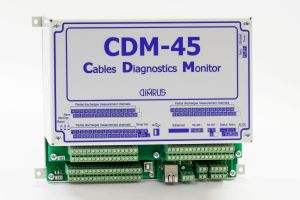 «CDM» system is used for periodic on-line monitoring of cable insulation condition of up to 45 cables in combined cable assembly (switchgear). Optionally the monitoring systems for 15 or 45 cables are available.

«CDM» is for monitoring the condition of the power cable insulation, joints and terminations using PD measurement and analysis, which has the highest possible sensitivity for the defect diagnosis of any insulation type.

The features of the «CDM» system are the following:

«CDM» is designed to monitor the cable insulation online, and it is completely automatic. The «CDM» device built-in memory volume is enough for storing of PD measurements' results for a long time. The received information and the diagnostic reports are uploaded on-line to SCADA.

The on-line diagnostics of the cable insulation condition is done inside the device by the built-in algorithms. If the critical PD levels are reached, the red LEDs light up on the «CDM» device enclosure. The PC program automatically generates the condition reports for all the monitored cables.

For cable condition monitoring with «CDM» system it is necessary to do some preparatory procedures.

First, «RFCT-7» PD sensors should be installed on the grounded shield of the cables planned for monitoring. The sensors are connected to the «CDM» with coaxial cables of one and the same length.

The circuit configuration scheme is easily drawn by special design software. While creating the configuration scheme, all the information necessary for defective cable detection, its condition assessment, specifying the insulation defect type and its danger is entered into the program.

The most difficult problem of PD measuring in high-voltage cables is noise rejection; the noises reduce the system diagnostic sensitivity in tens or even hundreds of times.

The "CDM" system has the firmware for noise rejection. It includes the following algorithms:

«CDM» has the function of defect location. A PD pulse of the insulation defect is used as a probe pulse. If the line has no pulses of sufficient amplitude, the induced noise pulses can be used as probe ones.

There is a built-in «on-line» reflectometer in «CDM», which also expand the diagnostic capabilities of the system. 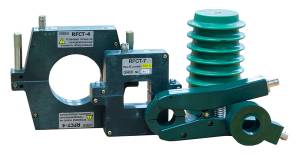 For PD measurements the following sensors are available:

The sensors are chosen in accordance with the cable type and the cables layout in the switchgears.

«RFCT-7» sensor is a split-core sensor with the 34*34 mm inner window. The sensors measure partial discharges in the conductors with the power current of up to 1000 A. They are specially designed for the use in the cable insulation monitoring systems.

If the grounding conductor (or bus) is too thick for «RFCT-7» sensor, then «RFCT-4» split-core sensor with the 67 mm-diameter window can be used.